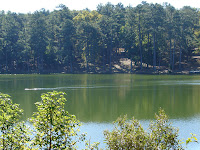 This is the second time that we have hosted at F.D.R State Park and we have camped here on numerous occasions but we have never really known the history of the park. As with a lot of American history it begins with the Native American. This area was once the home of the Creek Indians. They gave up their land to the State of Georgia under the Treaties of 1825 and 1826. The highway that runs past the entrance to the park, Hwy. 354 ,was the main north-south trail of the Native people who lived in this area. This trail actually began as a buffalo trail. This area later became known as King's Gap after a trader named King who pitched his tent near where the rock b 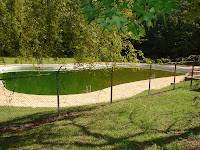 Work on the Park began in 1932. It was built by the CCC (Civilian Conservation Corps). In the actual campground there is a 15 acre lake named Lake Delano which was dug by hand by the CCC workers. The Park Information Center was once known as Roosevelt Inn. All the stone used to build the inn as well as the pool were blasted out and loaded on mule drawn wagons and taken to the different sites. One interesting fact that I learned was that the arc 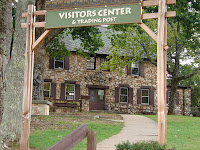 h stairway in the Park Information Center is an unsupported stairway. FDR himself sat in his wheelchair giving directions for placing each rock. This stairway is in the lobby today. He also planned the route of Highway 190 along the top of the mountain. The stone bridge is named Roosevelt Memorial Bridge in his honor. He also designed the Liberty Bell Pool and today at 500,000 gallon capacity is one of the largest and prettiest pools of this time still in use today.

There are 5 camping sections in the campground itself. Most have 30 amp hookups, a few have 50 amps. There is no sewer hookups. Some sites are 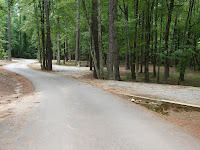 pull-thrus, some have a view of the lake. Two sections are designed mostly for primitive tent camping. Two bathhouses are new and two are somewhat old but clean. There are three bathhouses that have washer and dryer options. There are about 40 miles of hiking trails in the Pine Mountain Trail system.

F.D.R. State Park is a special place for Mike and I. If you are ever in this area we highly recommend you give F.D.R. a try. Don't forget to visit Callaway Gardens as well as Warm Springs, Georgia and the Little White House.
Posted by Happytrails at 3:10 PM