A Change of Plans

If it’s not one thing it’s ten!!  We were planning a trip down to Gulf Shores and the Fairhope, Alabama area leaving on Thursday morning!!  We needed to get away and wanted to see Darrell and Judy Patterson before they left Rainbow Plantation for their summer travels and catch up with Paul and Margery Zeller again.  With the laundry all complete and everything almost packed we woke up Wednesday morning to discover our little Shih Tzu, Nick, not feeling his usual perky self!!  We watched him for a few hours and then decided things were just not right and with us leaving the next morning we wanted to make sure he was ok.  So off to the Vet we headed. 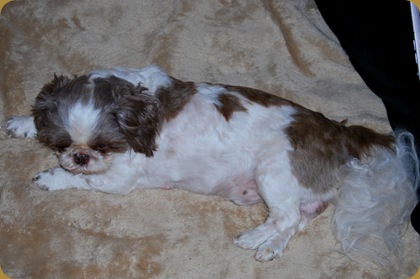 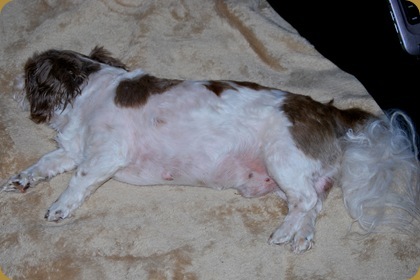 After checking Nick out, Dr. Whitlow couldn’t really pinpoint exactly anything specific. He asked me if he jumped a lot and I said no thinking of jumping up not down.  I told him he was prone to stomach issues so he gave him some “souped up Pepto Bismal” and so we left.  A few hours later we noticed that whenever we touched him he would wince a little.  Again, we knew something was just not right.  So off we went back to the Vet.  This time I did confess that there are times he might jump off the sofa….he never jumps up, doesn’t know how!  He began to check along his back and that is when the real problem was discovered.  Little Nick had a slipped disc.  He performed a chiropractic adjustment and a laser treatment on him and hoped we might not have to use steroids.  Our Vet is closed on Thursday so we watched him and kept him as calm and quiet as we could.  This was not too hard since he really didn’t feel too good.  We knew Dr. Whitlow wanted to see him on Friday so we immediately halted our plans for heading to Gulf Shores/Fairhope. 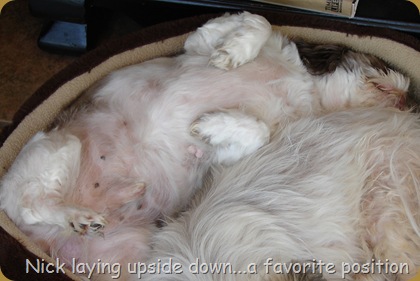 By the evening he was feeling soooo much better.  We are watching him carefully, keeping him calm (which isn’t easy now that he feels better) and he has to sleep in his crate.  When we go off we crate him.  I think he remembers the crate because we used to crate him when we went to work….years ago!  We sit on the floor with him to keep him from running after one of the other doggies….do you know how hard a hardwood floor is????  Wow am I sore!! 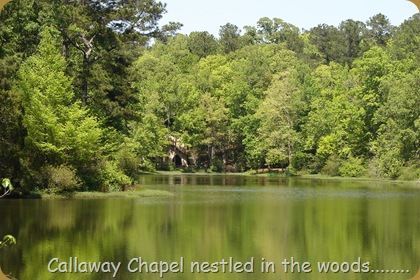 So our trip has been postponed until our little guy is better.  We have even entertained heading to Savannah instead of Gulf Shores.  I have become very motivated to explore Savannah after reading Donna’s blog (Adventures with Tassie).  They just left the area and Donna did an outstanding job of giving us a tour of this beautiful, historic city.  I have no doubt there will be many photo opportunities in this gorgeous place!!

So hurry up and get better Mr. Nick…a trip is in the making!!

Posted by Happytrails at 2:18 PM