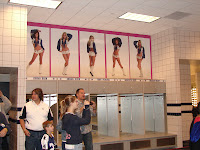 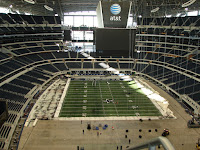 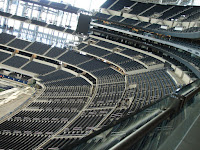 Last Friday Mike and I left the Fort Worth Stockyards and headed for the new Dallas Cowboy Stadium. One of the couples at MCD told us tours were conducted at the new stadium so we thought it might be a neat thing to do. When we got there we found out that they were not giving tours that day due to a Star Wars concert that evening. We decided to go ahead and purchase tickets for Saturday. This particular Saturday they were only giving tours until 12:00. We decided that since it was Saturday we would arrive at the starting time of 8:30 and boy were we glad. At 8:00 there was already a very long line waiting to purchase tickets. Since we already had ours we were sent on ahead and ended up in the first tour.
If you ever go there we would highly recommend purchasing tickets in advance and arriving early.
The facility is quite awesome! The tour was well organized and quite educational. There were many, many facts given during the tour that we just can’t remember but a little later this year there should be some information on the web telling about the stadium. The few facts that we can remember are:
1. The television hanging in the center of the stadium is 7 stories tall. In one picture you can see a man in a booth that gives this perspective of size. 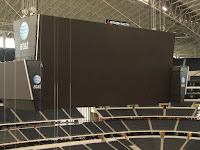 2. The duct work is 2 ½ miles long.
3. Each speaker hanging in the stadium would fill the flat bed of an 18 wheeler.
4. The old stadium was 900 thousand square feet and the new one is over 3 million square feet. 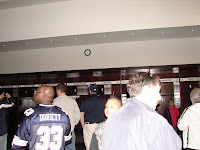 5. In the Cowboy’s locker room each locker cost $10,000 to build.
6. There are 3,000 Sony TV’s throughout the stadium and in the near future there will be an additional 2,000. The giant screen is a Mitsubishi.
7. There are no bad seats, no poles blocking vision.
8. There are 2 arches that help support the stadium and the opening. Each arch is larger than the arch in St. Louis.
9. Field level is 300 below ground level
10. By the 2011 Super Bowl they will be able to seat 105,000 people.
11. The city of Arlington gave $330 million of the $1.4 billion cost of the stadium and Jerry Jones picked up the rest of the tab.
12. Jerry Jones is a very rich man. No relation.
They gave out so much more information than this but you just can’t remember it all. As I said it should be published by the end of the season. The pictures tell it best.
It was a fun day and we are glad we got to see one of the “new” wonders of the world.
Posted by Happytrails at 9:37 PM