Searching for a Shroud 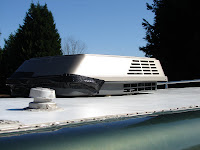 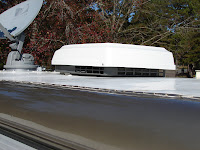 We’re looking for a shroud. No, not that kind. The story began on our trip back to Georgia from Texas. The weather was anything but kind. It rained very hard with lots of strong winds. We made our way to Louisiana and stopped for the night. The next morning as we were getting ready to leave I heard a drip, drip,drip sound coming from the living area. Not a good thing. I called to Mike to investigate that scary noise. Sure enough, we had a leak coming from the ceiling where one of the air conditioner vents is located. Mike went outside and up on the roof to take a look and quickly discovered a cover missing off of one of our air conditioners. Being newbies we first thought that the air conditioner being uncovered was causing the leak. We called around and found an RV dealership that thought they could help us get the air conditioner covered and back on the road. We drove to Clay’s RV in West Monroe, Louisiana where they discovered that the seal around the air conditioner was the cause of the leak. They replaced the seal and sold us a shroud, yes that is what it is called, in order to get us back on the road. It took them almost two hours to complete the job so between the labor at $100 per hour and the parts we left there $400.00 lighter. Now I am not sure they helped us or if they“saw us coming.” All I know is the leak stopped but the rain did not. What we discovered upon returning to Georgia was that the other shroud had also cracked and they had used duck tape to hold it together so it wouldn’t blow off. What a nice fashion statement! Now we needed to purchase yet another shroud and we wanted to have them look the same. We checked our numbers in the Penguin book (our air conditioners are made by Penguin) to order the correct shroud and found out what we purchased in Louisiana was a generic shroud and not necessarily the one for our unit. We even tried to find the number of the one we had already purchased so they would match and couldn’t find anything with that serial number. We also discovered that the generic shroud had no “air” vents and the original ones did. Yikes, now we might need two shrouds that match and are made for our unit. So the hunt began. Mike checked our serial number again on our Penquin book and we called Opelika RV to place the order. Today Opelika RV called us and in our talking with the parts manager we found out the ones that came in are also without vents and in the wrong color. Great….now we are trying to find out why the originals have vents and the replacements don’t. Mike called Newmar and gave them our VIN number and they identified the correct Penquin units that were put on our unit. We called Opelika RV and gave them this information so they could begin the search for the correct shroud for our Dutch Star.

So the search continues for the missing shroud.
Posted by Happytrails at 2:49 AM