A Drive through Denison

We took a Sunday drive through several of the areas we are responsible for while here at Hagerman. One of those areas is Haller’s Haven Nature Trail. This is a short 1 mile trail. This trail was recently renamed from its former name of Dead Woman’s Pond.
A farmer and his much younger wife were scraping out a living in Grayson County. The attractive young wife had not been seen for a while. The farmer was noticed By a neighbor driving his wagon down to the local pond with a large bundle in the Back. Said farmer returned home with the bundle missing. From that time on, the Locals began referring to the pond as Dead Woman’s Pond. 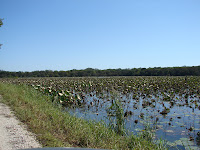 at walking area with nice shade trees in spots. At the two mile marker is the namesake Meadow Pond. Here you see raptors, wading birds and wild pigs. Today we only saw the wading birds but it was a bit hot. This area used to be the old rail bed for the railroad.

After lunch we went into Denison to explore the birthplace of President Dwight D. Eisenhower. We began at the visitor center where we viewed many memorabilia and exhibits highlighting his life and accomplishments. We viewed a short 12 minute video that was pretty informative. The birthplace is a modest two story home that shows the working class life of the Eisenhower family. President Eisenhower was the only child born in this house and lived here only until about 3 years of age. He, in fact, didn’t remember living in the house. There is a beautiful statue on the grounds of “Ike” presented to the Texas Historical Commission. I never knew President Eisenhower was an artist. He began his paintings at the urging of Winston Churchill in order to help with his stress and admitted it was very calming. He did most of his paintings at the Eisenhower home in Pennsylvania.

It has been a beautiful Sunday and we have enjoyed our drives, hikes and exploration of the Denison area.
Posted by Happytrails at 9:25 PM