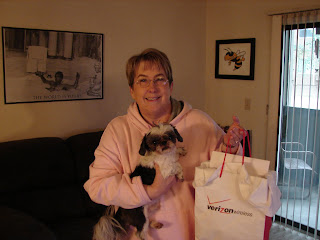 I guess I never mentioned that Mike and I have a “grand” also. Our grand is not exactly like those of you that have grandchildren and call them your “grands.” Our grand is a 5 pound (wringing wet) ornery cantankerous little Shih Tzu that belongs to our son, Stephen.

This morning we got a call from Stephen saying Josh, our grand-dog, was not acting like he felt good. He was just laying around kinda lifeless and wouldn’t eat. Being the devoted grandmother that I am I immediately got myself up and dressed and we headed for LaGrange and Stephen’s apartment.

He was right….Josh wasn’t his usual wiry self. We decided to bring him back to the motorhome for a day of R&R with his friends Nick and Casey. Nick happens to be Josh’s brother, having the same mother and father but from a different liter. We also placed a call to the Vet that takes care of Josh….its complicated but Josh isn’t easy to deal with. We spoke to Brian, the Vet, and he assured us that it didn’t sound too serious. Josh has been known to have seizures but he didn’t feel these symptoms were related to that issue. Since we were able to get him to eat some of the can dog food we feed our babies and drink water he felt that it wasn’t intestinal. That brought him to the conclusion it most likely was a disc problem. He has had that problem before and said that these little dogs have problems with their disc from time to time. It seems they get lethargic and in the rest mode when this happens. Brian felt like nature would take over and begin the healing and we needed to keep him quiet and calm. This is exactly what we did.

So today we spent the day being good grandparents to our little grand-dog and returned him to Stephen this evening. He seems to be resting on the sofa with Stephen and enjoying being waited on hand and foot…..or paw and foot. We are hoping he will be much better in the morning but if he isn’t we will be off to visit the Vet in person. After all….. isn’t that what good grandparents do?????