It was another busy weekend! We were only about 70% full but this crowd was a little busier. We had several children that were skateboarding down the road on Friday evening when rigs were pulling into the campground. Needless to say we weren’t on their popular list when we asked them to stop. In fact, it is a rule in the campground…NO SKATEBOARDS! It just isn’t safe!

We sold lots of ice but very little firewood. We still had a few sites that had campfires. I think it is adorable, no matter what the temperature, kids want a campfire. You just can’t camp without a fire. The poor parents were sitting there with fans blowing at them in order to endure the heat. It is so nice to see families together enjoying the outdoors!

We are busy this week getting all the sites in good condition for the BIG Fourth of July weekend. There aren’t a lot of things to do but we want to make sure all the sites look good. Mike still wants to try to finish one section of shrubs down by the lake. Yesterday, as he was pulling some limbs out, he was nailed three times by a mean yellow jacket. I joked on facebook saying…it wasn’t the Georgia Tech type either. It seems the nasty little creature flew up the pant leg of his jeans….need I say more????

The weather stays hot with high humidity but we work mostly in the mornings and evenings to avoid the heat of the day. I guess we have lived in the south so long it isn’t something we can’t deal with. I suppose you just consider it part of your life…kinda like the folks up north deal with the snow. You might not like it but you just get used to it and go on. Our motorhome stays nice and cool with the temperature where we like it…about 70 degrees. I know many are suffering, so hopefully this heat wave will pass soon and things can get a little cooler or at least less humid. With all that said…we might just need to experience summer in a cooler climate next year to just see what it’s like. 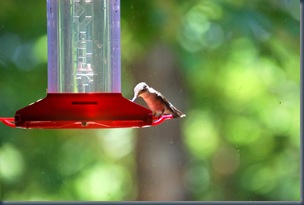 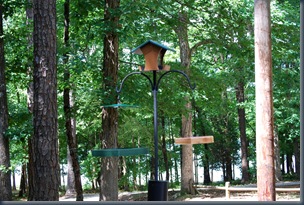 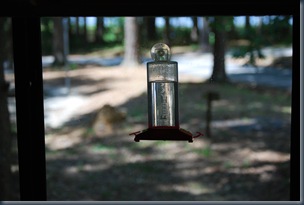 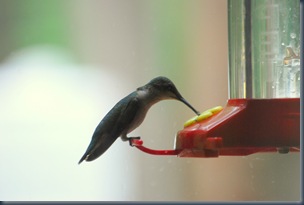 . Several of our readers made a nice comment about our hummingbird pictures that we posted saying we were “good.” Well, I must confess it isn’t really that hard. We have a hummingbird feeder attached to the outside window of our living area in the motorhome. 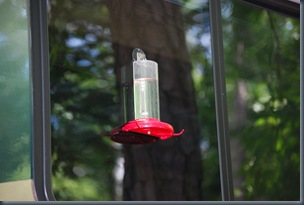 Mike’s recliner sits directly across from the window. He sits there with his camera and zoom lens ready and when the little fellows come to dine he just starts snapping shots. The hummers have really gotten used to coming to the window and when they fly up they don’t get spooked as easily. We really enjoy these tiny little birds so much. 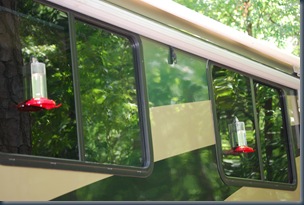 Yesterday, we went into town and purchased another feeder that we are putting on the dinette window. We can feed more hummers and they will be a little more separated from each other. Thanks for the nice compliments but it really isn’t skill just creative thinking.

Thanks for stopping by and hope you have a great week. Stay cool!!