A new spot! Yep, we took a new spot and now have a new view in the same campground we have been staying in while visiting our son Stephen.

This campground has undergone a new addition and some upgrading in the past few years. Originally it was a KOA which was purchased by a private couple. They owned the campground for several years and about three years ago they sold to a company. This company purchased the land next door to the original campground and began the expansion. Now there are actually two sections to this campground - the new one and the old one. Along with two distinct sections there are two different rates. Being the conservatives that we are we opted for the older section and the lower rate. This has been working out very well for us. We had a relatively level site with a great view of the southwest sky for our satellite. After returning this spring we began to notice a lack of care in this older section and many permanent campers. Permanent campers aren’t necessarily a bad thing but there doesn’t seem to be any “rules” for keeping campsites in order. So along with the tiredness of the old section and the many permanent residents, we decided to move to the new section. 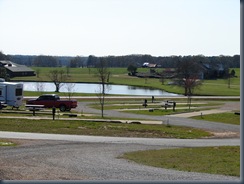 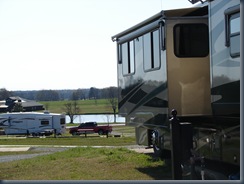 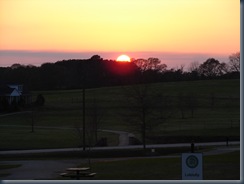 We had previously noticed a really nice site sitting on a rise overlooking a beautiful lake and rolling green pasture. We have always admired this view but continued to resist. Well, this site was vacated a couple of days ago and we looked at each other and decided to go for it. Ok, we’re splurging but the view is beautiful and there are more Rv’ers in this area so perhaps it is worth just a little more money. So we have decided to extend a few more weeks in this area and enjoy the view.

Posted by Happytrails at 9:03 PM