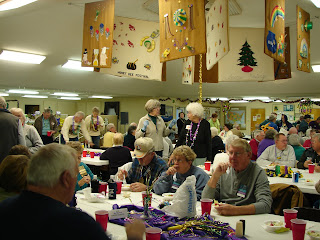 Tonight marked the opening of Mardi Gras season here at the Plantation and surrounding areas. Mike and I have never been a part of the true Mardi Gras celebration. Living in LaGrange, Georgia we obviously were aware of Mardi Gras but it was not “celebrated” in the way that it is in this area of the country. One of the things we wanted to experience in living the full-time lifestyle were the different cultures found in our country. I did a little research and found out that Mardi Gras or Carnival Season marked the beginning of the Epiphany and ended the day before Ash Wednesday or Fat Tuesday. Mardi Gras is French for Fat Tuesday which marked the ritual of the last night of eating rich and decadent foods before Lenten season begins on Ash Wednesday. There are many, many local parades to celebrate the season with the tossing of beads, moon pies and various other things I am sure. The children even get a day off from school on Fat Tuesday and many businesses are closed. It is a big celebration and if this evening was an indication…. a fun time. 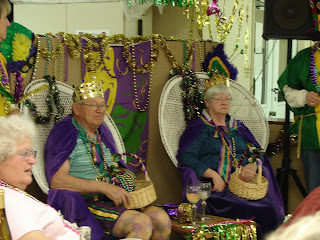 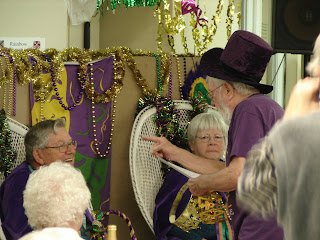 The Mardi Gras celebration began this evening with the crowning of the king and queen of the Plantation. We all gathered at the clubhouse for dinner and at the end of the dinner we were all served a cupcake. Two cupcakes contained a tiny baby and whoever bit into their cupcake and found the baby was the king or queen. After identifying the (pre-selected) king and queen they were whisked off and dressed for their new roles. They will rein until the end of Mardi Gras (Fat Tuesday) when they will be dethroned. They paraded through the clubhouse to the tune of “When the Saints Go Marching In” and finally sat on their thrones and watch several skits for entertainment followed by a band and music. The celebration will continue with an early breakfast at the clubhouse tomorrow followed by several local parades. On Sunday we will have the usual ice cream social followed by the arrival of the king and queen with more skits and line dancing and karaoke. Monday will be the parade at Rainbow Plantation followed by lunch together and even more skits and music. On the last day, Fat Tuesday, we will have our evening meal after the arrival of the king and queen. We will once again have skits and costume judging with the theme being “Fractured Science Fiction.” After this will be the Mardi Gras Ball with the band North Wind providing the music. Should be an exciting few days here at the Plantation. 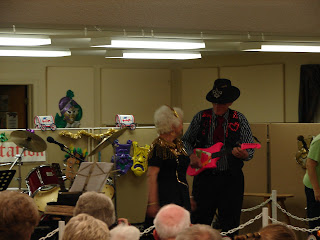 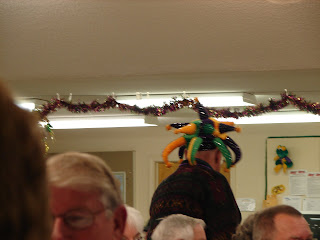 Tomorrow morning Mike and I are going to follow veteran Mardi Gras parade goers Darrell and Judy Patterson to Foley to experience our first ever Mardi Gras parade. I certainly hope the rains have stopped and the weather is a tad warmer for this event. Either way we are excited to experience our first ever Mardi Gras celebration here at the Plantation and learn first hand more about this annual event that takes place in this area.
Posted by Happytrails at 11:19 PM