Today we attended our first ever Mardi Gras parade. We got up early and braved the cold temperatures to venture to Foley, Alabama at 9:00 for the 10:00 “scheduled” parade. What we didn’t know, as well as few others, was that the time had been stated wrong in the paper and the parade was actually scheduled for 12:00. Ok, what do you do in Foley on a Saturday morning three hours before parade time?? We started off by making the economy a little better by going to Stacey’s Rexall Drug and Old Tyme Soda Foutain and purchasing 10 cent coffee. 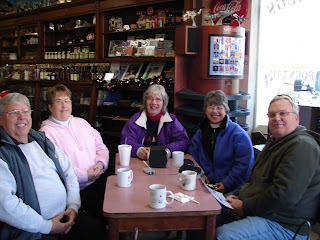 This is a really neat drug store/soda shop reminiscent of those commonly seen many years ago. It is complete with a small train that travels the perimeter of the shop on a ledge up toward the ceiling. While we were there somebody put money in the juke box and played some old tyme rock-n-roll. We sipped our coffee and discussed what else a person could get into in Foley on a Saturday morning. Well, Darrell had a great idea! Since Mike and I had never been to the model train depot we decided to walk down the street and take in this unique treat. It is quite unique with an entire city displayed in scale. 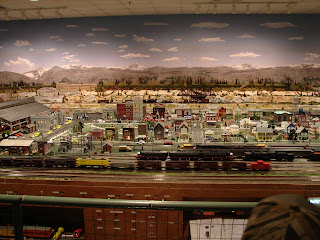 We got lucky because we got the guided tour by one of the volunteers. He held a flashlight and pointed to each display explaining what it was and what was going on at that particular display. He was good and quite humorous!

From this point we walked slowly back toward Stacey’s in hopes of enjoying one of their famous milk shakes but alas the crowds had grown and Stacey’s was packed so we decided to plant our chairs along the street and wait for the parade. We found a nice spot in the sun which actually made it quite comfortable on this chilly morning. 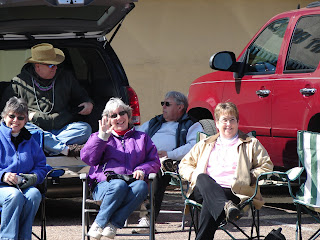 About an hour later we could see the parade making its way down the street. Of course there were the floats/decorated cars with folks throwing various items out into the crowd…..mostly beads. 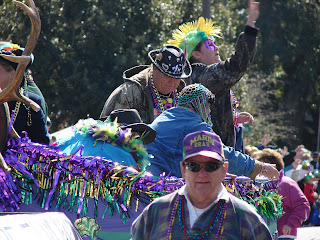 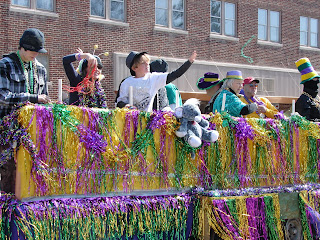 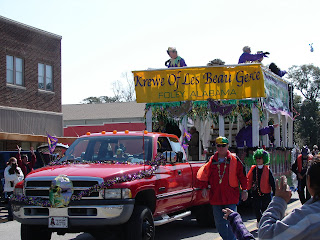 The local high school band marched and we managed to catch a few beads and three moon pies. Darrell and Judy said the Foley parade is a smaller parade by area standards but it was very enjoyable. We have some tentative plans to attend the Fairhope parade on Monday night. It all depends on this unpredictable weather.
After the parade we decided that it was time for lunch….. after all we never did get to enjoy that milk shake. Judy suggested LA Barbecue in Summerdale. 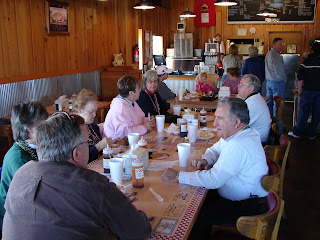 We pulled a couple of tables together and had some delicious barbecue with Darrell and Judy, Glenn and Sylvia and Mike and Peggy. Good friends, good food and good times. Life is good.
Happy Valentines Day!!
Posted by Happytrails at 1:59 AM